Who are you?
Human or animal consciousness?
Human birth is rare – don’t waste it.

You are not this body but a soul covered in a material body. 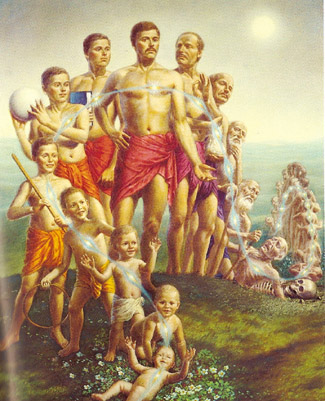 The Bhagavad-Gita teaches us:

“As the embodied soul continously passes, in this body, from boyhood to youth to old age, the soul similarly passes into another body at death. A sober person is not bewildered by such a change.” Lord Krishna, BG 2.13

You are a soul covered by a material body.  The body is changing from youth to old but you the soul is remaining the same.  Due to the influence of the illusory energy we identify the self with the body.

In this material body we suffer the pangs of birth, old age, disease, and death.

We have to reincarnate from body to body, life after life. At death we will take on another body in the animal kingdom, or again in the human species. What is our next body will be dependent on our karmic actions (good and bad actions) taken in life.

Just as we change worn out clothes, furniture, cars, shoes, houses, jobs, and even partners. We will change our body at death. Just as a manufacturing company designs products today to make tomorrow. We design our next body today with our current actions.

There are 8.4 Million different material bodies that the individual soul keeps circulating in. So we should not get too attached to this body.

We are always ‘too busy’ in eating, sleeping, mating, and making a career.  We never have ‘time’ to enquire into the absolute truth. Once again we cling to temporary material enjoyment in our short life span.  We keep running after material things which will not satisfy the self.  Material things are temporary and to really satisfy the self we have to seek something more permanant which is spiritual.

Most people are very busy in the Modern Lifestyle of partying, discoing, meat eating, intoxication, and relationships. While engaging in these demonic activities, we forget the naked truth of death, which we all have to meet one day. Death is certain and it can take you at anytime. At death, the laws of nature will act, and we will get another body according to our work.

Human birth is very rare and now that we have attained a human form of life, we should utilize our developed consciousness to inquire into the Absolute Truth. Yet most humans engage in the life style of eating, sleeping, mating and defending, which is available even in the animal kingdom without the hassle of nine-to-five jobs, marital problems, medical operations, and the bother of tax returns.

A person in the mode of goodness knows that death is born along with his birth. He knows that he is dying at every second. He therefore prepares himself for the next life or for liberation from the cycle of birth and death all together. He enquries: Who am I ? Where have I come from? Where am I going after this life?

An ignorant person is ‘too busy’ with materialist life, satisfying only his genetals and belly. He forgets that death is certain and just around the corner.

If we simply eat, sleep, mate, and enjoy material life. Then we are no different from the animals. The animals also eat, sleep, mate, and enjoy material life. In fact, if we simply want to engage in these activities, then we are better off in the animal kingdom. The animals engage in all these activities without the bother of jobs, bills, marital problems and other humanly conditions of life.

Those humans who spent their life simply eating, sleeping, mating, and enjoying material life will be upgraded to a higher level at death. So they can continue with these activities but without the hassle of jobs, bills, marital problems and other humanly conditions of life in their next life. They will be born in the animal kingdom. God is very fair and merciful, he satisfies all our desires. If we behave like an animal then we will be one in our next life, at our own request.

The difference between human and animal consciousness is that humans are inquisitive.

Animals do not enquire. They simply eat, sleep, mate, and enjoy material life.

Humans are charitable. It is the duty of every human being to perform welfare activities for the benefit of those who are less fortunate with their wealth, intelligence, and words. The animals are not charitable; they simply enjoy everything for them selves.

Are we human or animal?

Charles Darwin is famous worldwide for his evolutionary theory. According to his theory, one species evolved into another. Thus one body changes into another. We evolved from the animals, our closet relatives in the animal kingdom are the monkeys.

The Vedic Theory of Evolution

The Vedic scriptures also state an evolutionary process, but the definition is different from that of Charles Darwin. There are 8.4 million different species of living beings in the whole of creation as follows:

All these species were created by God and like Charles Darwin’s theory; we also evolved from the animals but not by changing the same body, but by transmigration of the soul from one body to another.

Changing bodies from birth to death, and the evolution of 8,400,000 species.

Transmigration Of The Soul From One Body To The Next 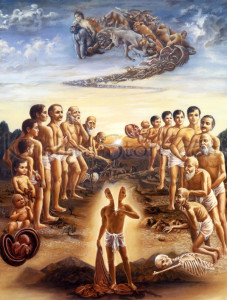 Every living being is a soul (including plants and animals) covered in a material body. The soul takes one body then quits it to take another and so on. Going through all the various species in the plant and animal kingdom (8 million) and then finally taking a human body. The human body is the highest and most elevated of all bodies.

“As the embodied soul continuously passes, in the body from childhood to youth to old age, the soul similarly passes into another body at death. A sober person is not bewildered by such a change.” Lord Krishna (Bg. 2.13)

“As a person puts on new garments, giving up old ones, the soul similarly accepts new material bodies, giving up the old and useless ones.” Lord Krishna (Bg. 2.22)