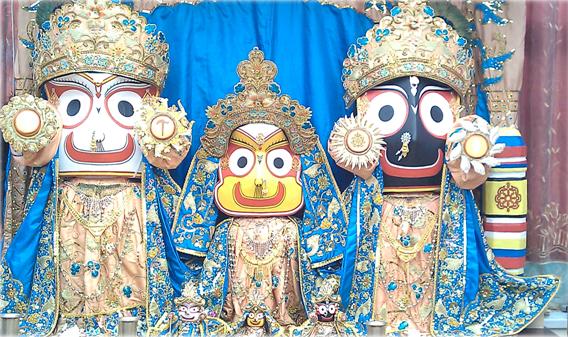 (Left Picture) Lord Jagannath (on right), Baladev (left) and Lady Subhadra (middle) are the Deities at the ISKCON Birmingham Temple.

Five thousand years ago, Lord Krishna, with His elder brother Balarama and His younger sister Subhadra, once visited Kurukshetra in a chariot. Two thousand years later, King Indradyumna started the temple of Jagannatha in Orissa at Puri, and he wanted to establish a picture in the temple of Krishna, Subhadra, and Balarama coming to Kuruksetra in the chariot during solar eclipse. He employed Visvakarma to carve them from wood, and made a contract with Visvakarma that the sculptor would do his work behind closed doors and the King should not disturb him. But the King, being very impatient to see, forcefully opened the door. Visvanatha stopped carving, but the king decided, “Never mind it is half finished. I shall install these deities in the temple.” Since then, the three deities Jagannatha, Balarama and Subhadra are being worshiped in India at Jagannatha Puri.

The significance of Jagannatha Puri and the story of how the Deities first appeared goes back many hundreds of years to the time of King Indradyumna, who was a great devotee of Lord Vishnu. It is related that one time in his court the King heard from a devotee about an incarnation of Lord Vishnu, named Nila-madhava. (Nila-madhava is the Deity form of Lord Vishnu.) The King very much wanted to see this form of the Supreme and sent many Brahmanas to search for Nila-madhava. All came back unsuccessful except for Vidyapati, who did not come back at all. He had wandered to a distant town which was populated by a tribe of people known as Shabaras of non-Aryan heritage. He had stayed in the house of Visvasu, and later, at Visvasu’s request, married his daughter, Lalita.

After some time Vidyapati noticed that Visvasu would leave the house every night and return at noon the next day. Vidyapati asked his wife about this. Though her father had ordered her not to tell anyone, she told Vidyapati that Visvasu would go in secret to worship Nila-madhava. After repeated requests, Vidyapati finally got permission to go see Nila-madhava, only if he went blindfolded. But Vidyapati’s wife had bound some mustard seeds in his cloth so that a trail could be left to follow later. When they reached the shrine, Vidyapati saw the Deity Nila-madhava after the Shabara took off the blindfold, and he felt great ecstasy.

The story continues to relate that while Visvasu was out collecting items for worship, Vidyapati saw a bird fall into the nearby lake and drown. The soul of the bird suddenly took a spiritual form and ascended back to the spiritual world. Vidyapati wanted to do the same and climbed the tree to jump in the lake. Then a voice from the sky declared that before he jumped he should tell Indradyumna that he had found Nila-madhava.

When Visvasu returned to worship the Deity, Nila-madhava spoke and said that He had accepted the simple worship from him for so many days, but now He wanted to accept the opulent worship that would be offered by King Indradyumna. When Vidyapati went back to tell the King, Indradyumna immediately went to find Nila-madhava but could not locate Him. So the King arrested Visvasu, but a voice told him to release the Shabara and that he should build a temple on top of Nila Hill where the King would see the Lord as Daru-brahman, the wooden manifestation of the Absolute.

After great endeavor, King Indradyumna built the temple at Sri Kshetra, now known as Jagannatha Puri, and later prayed to Lord Brahma to consecrate it. However, Lord Brahma said that it was not within his power to consecrate the temple since Sri Kshetra is manifested by the Supreme’s own internal potency and is where the Lord manifests Himself. So Brahma simply put a flag on top of the temple and blessed it, saying that anyone who from a distance saw the flag and offered obeisances would easily be liberated from the material world. Nonetheless, after much waiting the King became anxious since Nila-madhava had not manifested Himself. Thinking his life was useless, the King decided he should end his life by fasting. But in a dream the Lord said that He would appear floating in from the sea in His form as Daru-brahman.

The King went to the shore and found a huge piece of wood that had the markings of a conch, disc, club, and lotus. This was Daru-brahman. But try as they might, the men could not budge the wood. In a dream the Lord spoke to the King and instructed him to get Visvasu and put a golden chariot in front of Daru-brahman. After doing this and forming a kirtana party to chant the holy names, and praying for Daru-brahman to mount the chariot, Daru-brahman was easily moved. Lord Brahma performed a sacrifice where the present temple now stands and installed a Deity of Lord Narasimhadeva, the Deity that is now on the western side of the temple.

From the wooden Daru-brahman, the King requested many expert carvers to carve the form of the Deity, but none could do so for their chisels immediately broke when they touched the wood. Finally the architect of the demigods, Visvakarma, (some say the Lord Himself) arrived as an old artist, Ananta Maharana, and promised that he would carve the Deity form of the Lord inside the temple in three weeks if the King would allow him to work behind closed doors. But after 14 days the King became very anxious because he could no longer hear the sounds of the carving. Finally he could stand it no more. On the advice of the queen he personally opened the doors of the temple to see what was happening. Then he saw the forms of Lord Jagannatha, Lord Balarama, and Lady Subhadra. But because the King had opened the doors sooner than he was supposed to, the Deities were not completed; Their feet and hands had not yet been carved. Thus, the Supreme manifested Himself in this form.

The King felt he had committed a great offense for having opened the doors before the allotted three weeks had passed, so he decided to end his life. But in a dream Lord Jagannatha told the King that though he had broken his promise, this was just a part of the Supreme’s pastimes to display this particular form. The King was told that this form, even though it appeared to be incomplete, was actually the form of the Lord that was meant to be worshiped in this age of Kali-yuga. Occasionally the King could decorate the Deity with golden hands and feet. Yet those devotees filled with love would always see the form of Lord Jagannatha as the threefold bending form of Syamasundara, Krishna, holding a flute. Thus, the Supreme appeared in this form so that people could approach and see Him, especially as He rides through town on the huge carts during the Ratha-Yatra festival.