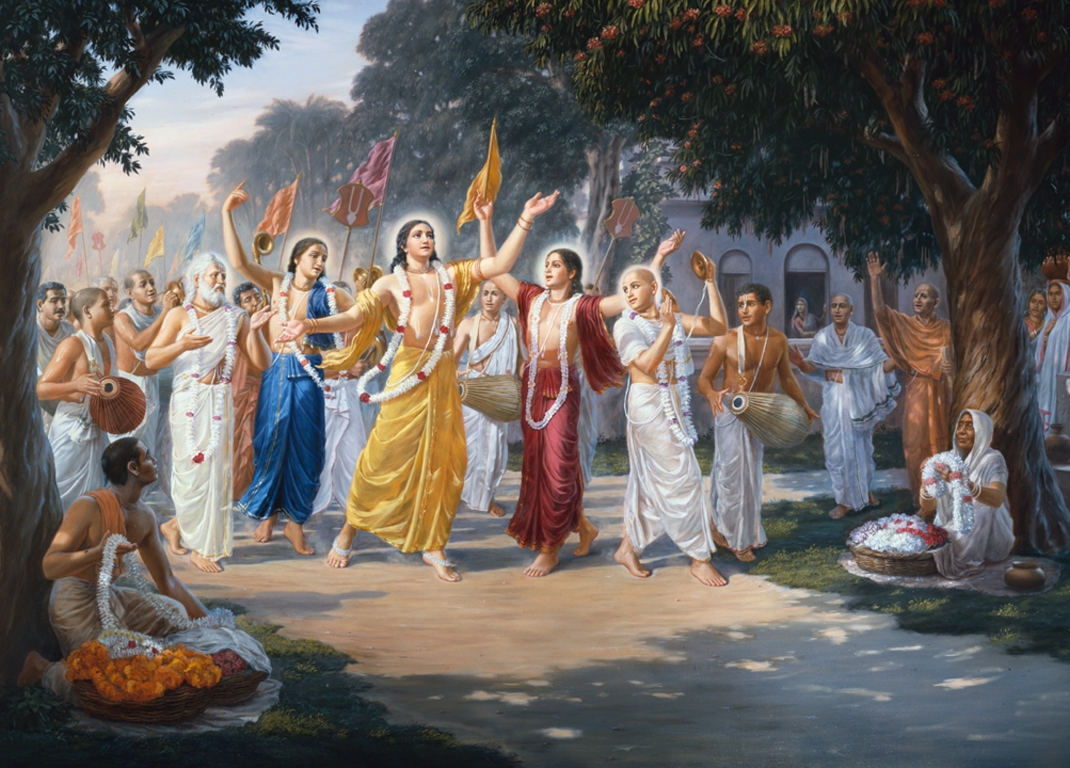 The two Lords Gaura and Nitai, also known as Gauranga or Sri Chaitanya Mahaprabhu and Nityananda. Gauranga means ‘One with the golden bodily complexion’ and Nityananda means ‘He who embodies eternal bliss’.

Nityananda Prabhu appeared in the village of Ekachakra, in West Bengal, India, around 1474. In the Caitanya Caritamrita and other scriptures He is declared to be the avatar of Lord Balarama, the direct expansion of the Supreme Personality of Godhead, Krishna.

Krishna taught Bhagavad-gita to liberate all souls, and He returned as Sri Chaitanya to show us how to live by the Gita’s teachings.

“In this way, assuming the sentiment of a devotee, He preached devotional service while practicing it Himself.” —Chaitanya-Charitamrita, Adi 4.41

Lord Nityananda, the eternal associate and expansion of Lord Shri Chaitanya Mahaprabhu. Lord Nityananda (Nitai) is none other than Shri Balarama, while Lord Chaitanya (Gaura) is Shri Krishna himself in the mood of his greatest devotee. Krishna and Balarama appeared on this planet 5,000 years ago, while Lord Chaitanya and Nitai appeared 500 years ago. Lord Gaura and Nitai are amazingly, and unlimitedly merciful forms of God, who have come to Earth to deliver the especially fallen souls (i.e, us!) living in the current time of quarrel and hypocrisy or Kali-yuga . Their lila (divine activities) are very deep and confidential and only the fortunate can enter into them or describe them–we will pray to do our best.

”I offer my respectful obeisances unto Shri Krishna Chaitanya and Lord Nityananda, who are like the sun and moon. They have arisen simultaneously on the horizon of Gauda [West Bengal] to dissipate the darkness of ignorance and thus wonderfully bestow benediction upon all.” [Chaitanya Charitamrita Adi-lila 1.2]

For the people of the Western world the many descriptions in the Vedas and their commentaries about the innumerable forms and expansions of God can be rather overwhelming and bewildering. This is partly due to having grown up with only one aspect of God in Islam, Judaism, or Christianity. Of course in Christianity there is also the conception of the Trinity, although it is not very well understood.

Our guru, Srila Prabhupada referred to Krishna as the Supreme Personality of Godhead. Godhead which generally refers to the nature of God, or the Holy Trinity in the West. However, it could imply other forms or aspects of the one spiritual substance of “Godhead”, which is how I think Prabhupada is using it. Although God is one, he is unlimited and inexhaustible, omnipresent and omnipotent, and we could add for our discussion, “omni-formed”.

Admitting our possible prejudice against God having many forms, let us look at the subject with an open mind, accepting at least the possibility. Even the idea of God having any form (which is thought as limiting) is difficult for many to accept, but unlimited forms? Why not? If God can do anything for his Divine purpose, why can’t he have or be one spiritual substance with diversity? And could his spiritual diversity have different aspects or forms? Although our material body is limiting, why does a spiritual form have to be a limitation?

We are a limited living being and we have many sub-personalities and sides of our nature, and people know us variously as well, so why not God? This is one way to understand the different expansions, forms and energies of God. If you are resistant to the idea, certainly you won’t be convinced by one blog or essay—and I am no scholar—yet you can know that some of the greatest philosophers of all time (although generally unknown) have argued convincingly about this subject of a personal God with many expansions, forms or incarnations to serve his divine will.

The Bhagavad-gita, and even more so, the Shrimad Bhagavatam and Chaitanya Charitamrita are meant for spiritually inclined thoughtful people who want to understand the truth from different angles of vision—and there are unlimited angles and perspectives of the One Supreme Truth. It is helpful to have a philosophical mind for understand the Krishna conscious philosophy—but not just material reasoning power alone.

This spiritual knowledge is simple for the open-heartedly simple, and difficult for the overly complex. Ultimately we will understand the Absolute Truth in its great complexity through a devoted, loving heart and not just by having a big brain. A devoted heart will incline the Sweet Absolute Shri Krishna and Balarama, or Shri Gaura and Nitai, to allow us to enter into their spiritual mysteries. Then all apparent contradictions will be solved through the logic of love.

“Let me surrender unto the lotus feet of Sri Krsna Chaitanya Mahaprabhu, who is the most merciful Personality of Godhead. He delivers those souls who are merged in ignorance and offers them the highest gift, love of Krishna, and thus makes them mad for Krishna consciousness.” [Govinda-lilamrta (1.2) by Shrila Rupa Gosvami]

Lord Nityananda is considered an extension of the mercy of Shri Chaitanya, and in that way even more merciful. According the scripture Chaitanya Bhagavat, Shri Chaitanya gave prema or love of Godhead to those who wanted that love, while Shri Nityananda gave this love to those that were reluctant to accept it.

I hope your appetite as been wetted to find our more about the great merciful Lord Nitai! If it hasn’t yet here is a prayer by the pioneer of the Krishna consciousness movement in the modern world, Shrila Bhaktivinode, entitled, “Madhur e harinam” or “The Holy Name is so Sweet.”

“Shri Shri Gaura-Nitai are so wonderfully merciful. They brought this harinama [the holy names] from Goloka-Vrndavana [the spiritual world]. Golokera prema-dhana hari-nama sankirtana. It doesn’t belong to this material world. Shri Shri Gaura-Nitai brought it here because they are so wonderfully merciful.”
“Who is the custodian of nam-hatta?”
“ Shri Nitai!”
“Nama-hatta means market-place. A market-place where the name is sold and purchased. What is the price?
The price is unflinching faith. He who has strong faith, unflinching faith in the Holy Name and faith in the words of sadhu[holy person], sastra [scripture], Shri Guru and Shri Krishna, only he can purchase it. The market is always eternally open.

Shri Nitai is more merciful than Shriman Gauranga Mahaprabhu. Shri Gaurasundara is wonderfully merciful. Shri Nitai is more merciful than Shri Gaurasundara. Shri Nitai is so merciful, He saw that the jivas [conditioned souls] have been suffering here, drowning in this ocean of materialistic existence from time immemorial. His heart bleeds, so Shri Nitai felt love, affection and compassion for them. He became sympathetic for the suffering souls, so He brought the Holy Name from Shri Vrajabhumi for those Kali-yuga people.

“Lord Sivaji with His five faces is chanting this madhur e harinama; this is so sweet this harinama! Lord Brahma chants this Shri- nama with His four faces, because it is so sweet!
Sri Narada Muni sings this Holy Name with his stringed instrument:

All are chanting because it is so sweet”!

Srila Bhaktivinoda Thakura says, “By only obtaining the namabhasa stage [clearing stage], Ajamila, a greatly sinful person was delivered. All his sinful reactions were destroyed, then at last he went to Vaikuntha!” So Shrila Bhaktivinoda Thakura says, “Just chant this Name, utter this Holy Name and go to Sri Vrajabhumi.[the land of Radha and Krishna]”