The scientific theory of creation is that there was a big bang, which created the material elements (earth, water, gases, chemicals etc..). These material elements then somehow combined together and created the various planets and one species of living beings. These living beings then somehow changed their bodies and became another species, and so on. In this way the millions of species of living beings we know of were created. This is termed as evolution, thus one body changes into another and so on.

The scientific theory of creation leaves many unanswered questions.

Not all these species are present on this planet.

Satya Yuga: The age of the truth and true religion. Everyone in the world is truthful and follower of the only religion in the world, the Vedic religion. The yuga (age) lasts 1.728 million years and the lifespan of humans is up to 100,000 years.

Treta Yuga: The introduction of ignorance takes place in this age. The Vedic religion is the only one in the world. The yuga (age) lasts 1.296 million years and the lifespan of humans is up to 10,000 years.

Dvapara Yuga: Increased decline in the truth and religious values takes effect in this age. The Vedic religion is the only one in the world. The yuga lasts 864,000 years and the lifespan of humans is 1,000 years.

Kali Yuga: The age of irreligion and ignorance. There is complete decline in religious principles. In the first few thousand years there are many religions, which will gradually completely disappear from the face of the Earth one by one. Only the Vedic religion will survive, but there will be very few followers. By 15,000 years into Kali Yuga, 99.9% of the humans in the world will become atheistic. Things will get so bad in Kali Yuga such that parents will eat their own children. The yuga lasts 432,000 years and the life span of humans is up to 100 years. We are currently 5000 years into Kali Yuga.

This is the skull of a 3-year old female dating back to 3.3 million years. 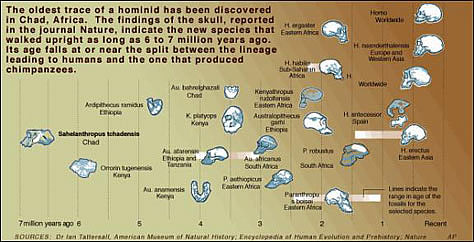 What Does the Vedic Scriptures State about the Age of this Universe and Humans.

This Universe has existed for 155.522 trillion years and this is just in the current cycle of creation and annihilation. Before this cycle there were countless other cycles and after this cycle which will end in 155.518 trillion years time. There will be countless other cycles. The cycle of creation and anhhilation is based on the life of Brahma, the engineer of the Universe. At the beginning of each day of Brahma, he creates everything in this Universe and then at the end of each day, there is partial annihilation Each day (12 hours) of Brahma is 4.32 billion years. Brahma lives for 311 trillion and 40 billion years, after this time there is complete annihilation of this Universe and the current Brahma dies. Then there is another Brahma and cycle repeats itself. This Universe is the smallest in Gods creation. There are other Universes, which are thousands and even millions of times bigger than this Universe.

Within each day of Brahma, there are 14 Manus. We descend from the 7th Manu. Manu is the first man created by Brahma, and his wife, the first woman is called Satarupa.