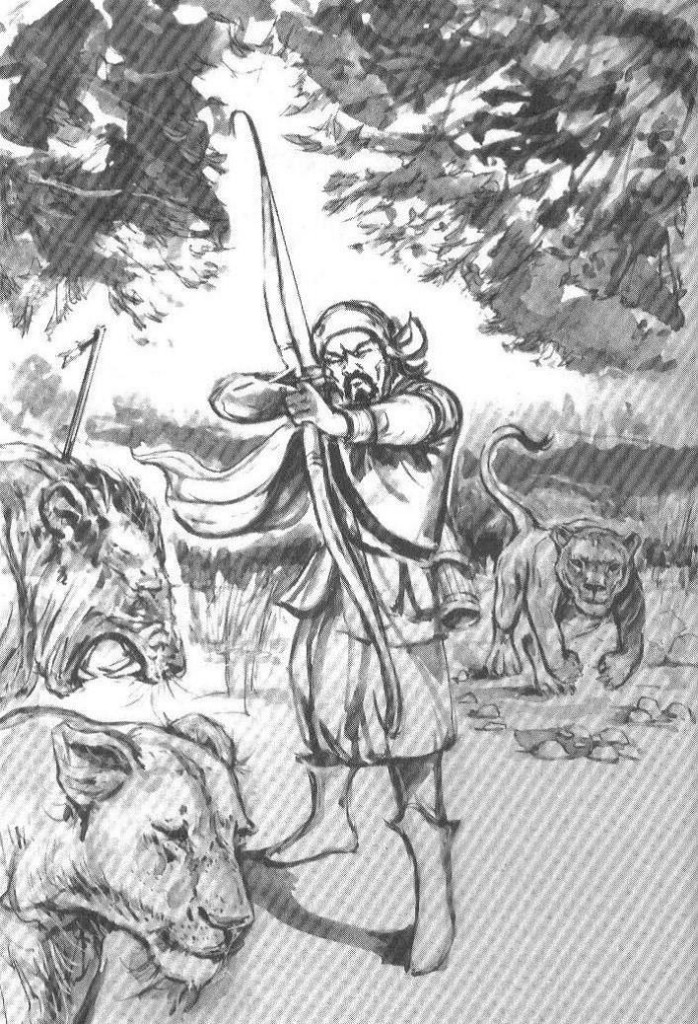 Sri Yudhisthira Maharaja said, “Oh Janardana, what is the name of the Ekadasi that occurs during the light fortnight (sukla paksha) of the month of Vaisakha (April-May)? What is the process for observing it properly? Kindly narrate all of these details to me.”

The Supreme Personality of Godhead, Lord Sri Krishna replied, “Oh blessed son of Dharma, what Vasishtha Muni once told to Lord Ramachandra I shall now describe to you.
Please hear Me attentively.”

Lord Ramachandra asked Vasishtha Muni, “Oh great sage, I would like to hear about the best of all fasting days that day which destroys all kinds of sins and sorrows. I have suffered long enough in separation from My dear Sita, and so I wish to hear from you about how My suffering can be ended.”

The sage Vasishtha replied, ‘Oh Lord Rama, Oh You whose intelligence is so keen, simply by remembering Your name one can cross the ocean of the material world. You have questioned me in order to benefit all of humanity and fulfill everyone’s desires. I shall now describe that day of fasting which purifies the whole world.

Oh Rama, that day is known as Vaisakha-sukla Ekadasi, which falls on Dvadasi. It removes all sins and is famous as Mohini Ekadasi. Truly, Oh dear Rama, the merit of this Ekadasi frees the fortunate soul who observes it from the network of illusion. Therefore, if You want to relieve Your suffering(s), observe this auspicious Ekadasi perfectly, for it removes all obstacles from ones path and relieves the greatest miseries. Kindly listen as I describe its glories, because for one who even just hears about this auspicious Ekadasi, the greatest sins are nullified.

On the banks of the Sarasvati River there was once a beautiful city named Bhadravati, which was ruled by King Dyutiman. Oh Rama, that steadfast, truthful, and highly intelligent king was born in the dynasty of the Moon (Chandra-vamsa). In his kingdom was a merchant named Dhanapala, who possessed a great deal of wealth of food grains and money. He was also very pious. Dhanapala arranged for lakes to be dug, sacrificial arenas to be erected, and beautiful gardens to be cultivated for the benefit of all the citizens of Bhadravati. He was an excellent devotee of Lord Vishnu and had five sons: Sumana, Dyutiman, Medhavi, Sukriti, and Dhrishthabuddhi.

Unfortunately, his son Dhrishthabuddhi always engaged in greatly sinful activities, such as sleeping with prostitutes and associating with similar degraded persons. He enjoyed illicit sex, gambling, and many other varieties of acts aimed at gratifying the senses. He disrespected the demigods (devas), the brahmins, the forefathers and other elders of the community, as well as his family’s guests. The evil-hearted Dhrishthabuddhi spent up his father’s wealth indiscriminately, always feasting on untouchable foods and drinking alcohol to excess.

One day Dhanapala kicked Dhrishthabuddhi out of the house after he saw him walking along the road arm-in-arm with a known prostitute. From then on all Dhrishthabuddhi’s relatives were highly critical of him and distanced themselves from him also. After he had sold all of his inherited ornaments and become destitute, the prostitute also abandoned him and insulted him because of his poverty.

Dhrishthabuddhi was now full of anxiety, and also hungry. He thought, “What should I do? Where should I go? How can I maintain myself? He then began to steal. The king’s constables arrested him, but when they learned who it was, and that his father was the famous Dhanapala, they released him. He was caught and released in this way many times.
But at last, sick of his arrogance and total disrespect for others, and their property, the ill-mannered Dhrishthabuddhi was apprehended, handcuffed, and then beaten. After whipping him, the king’s marshals warned him, “Oh evil minded one, there is no place for you in this kingdom.

However, Dhrishthabuddhi was freed from his tribulation by his father and immediately thereafter entered the dense forest. He wandered here and there, hungry and thirsty and suffering greatly. Eventually he began killing the jungle animals, the lions, deer, boars, and even wolves for food. Always ready in his hand was his bow, always on his shoulder was his quiver full of arrows. He also killed many birds, such as chakoras, peacocks, kankas, doves and pigeons. He unhesitatingly slaughtered many species of birds and animals to maintain his sinful way of life, the sinful results accumulating more and more each day. On account of his previous sins, he was now immersed in an ocean of great sin that was so relentless that it appeared that he could not get out.

Dhrishthabuddhi was always miserable and anxious, but one day, during the month of Vaisakha, by the force of some of his past merit he chanced upon the sacred Ashrama of Kaundinya Muni. The great sage had just finished bathing in the Ganges River, and water was dripping from him still. Dhrishthabuddhi had the great good fortune to touch some of those droplets of water that were falling from the great sage’s wet clothing. Instantly Dhrishthabuddhi was freed of his ignorance, and his sinful reactions were reduced.

Offering his humble obeisances to Kaundinya Muni, Dhrishthabuddhi prayed to him with joined palms: “Oh great brahmana, please describe to me some of the atonement I may perform without too much endeavour. I have committed so many sins in my life, and these have now made me very poor.”

The great rishi replied, “Oh son, listen with great attention, for by hearing me your life will change, and you will become free of all your remaining sins. In the light fortnight of this very month, Vaisakha (April-May) there occurs the sacred Mohini Ekadasi, which has the power to nullify sins as vast and weighty as Mount Sumeru. If you follow my advice and faithfully observe a fast on this Ekadasi, which is so dear to Lord Hari, you will be freed from all the sinful reactions of many, many births.”

Hearing these words with great joy, Dhrishthabuddhi promised to observe a fast on Mohini Ekadasi according to the sage’s instructions and direction. Oh best of kings, Oh Ramachandra Bhagavan, by fasting completely on Mohini Ekadasi, the once sinful Dhrishthabuddhi, the prodigal son of the merchant Dhanapala, became sinless. Afterwards he achieved a beautiful transcendental form and, free at last of all obstacles, rode upon the carrier of Lord Vishnu, Garuda, to the Supreme abode of the Lord.

Oh Ramachandra, the fast day of Mohini Ekadasi removes the darkest illusory attachments to material existence. There is thus no better fast day in all the three worlds than this.’

Lord Sri Krishna concluded, “and so, Oh Yudhishthira, there is no place of pilgrimage, no sacrifice, and no charity that can bestow merit equal to even one sixteenth of the merit a faithful devotee of Mine obtains by observing the Mohini Ekadasi. And He who hears and studies the glories of Mohini Ekadasi achieves the merit of giving away one thousand cows in charity.”

NOTE: If the holy fast falls on Dvadasi, it is still called Ekadasi in the Vedic literature.
Furthermore, in Garuda Purana (1:125.6), Lord Brahma states to Narada Muni:

“Oh brahmana, this fast should be observed when there is a full Ekadasi, a mixture of Ekadasi and Dwadasi, or a mixture of three (Ekadasi, Dwadasi, and Trayodasi) but never on the day when there is a mixture of Dashami and Ekadasi.” This is also upheld in the Hari Bhakti Vilas, Vaishnava smriti shastra, and upheld by Srila Bhaktisiddhanta Saraswati Thakura Prabhupad in his Navadwip Panjika introduction.